Truck manufacturers : review of the mergers and acquisitions

« There are too many truck manufacturers in Europe. » Leif Johansson, CEO of AB Volvo from 1997 to 2011, said to a German magazine in 2010, and that we could expect mergers or acquisitions in the truck industry. This is exactly what happened, especially with the recent acquisition of Scania by the Volkswagen group, finalised in May 2014. 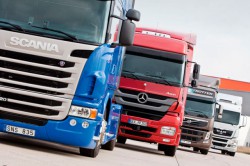 « There are too many truck manufacturers in Europe. » Leif Johansson, CEO of AB Volvo from 1997 to 2011, said to a German magazine in 2010, and that we could expect mergers or acquisitions in the truck industry. This is exactly what happened, especially with the recent acquisition of Scania by the Volkswagen group, finalised in May 2014.

An even tighter concentration is happening among truck manufacturers in the world. The trend of realising economies of scale, developping synergies and having a key role on the emerging markets isn't new, but it seems to intensifyin recent years.

Increase in purchase and mergers between truck manufacturers

In the first half of 2014, mergers and acquisitions in the world automotive industry have significantly increased, reaching their highest level in seven years. According to a recent study published by PriceWaterhouseCoopers, 250 transactions were closed in this period, an increase of 52,4%.

Several very important transactions were closed, for instance the full control of Scania by the Volkswagen group. This number of transactions still doesn't come close to the 333 mergers in 2007.

Now, it is difficult to keep track of the number of partaking from large worldwide groups onto their less important competitors. For instance, German group Daimler bought 15% of the capital from the Russian manufacturer Kamaz in 2010.

Two joint ventures have been created on equal terms : the first one, Fuso Kamaz Trucks Rus, manufactures in Kazan the Fuso Canter from imported collections from Japan to commercialise on the Russian market. The second one, Mercedes-Benz Trucks Vostok, produces in Moscow the Mercedes Actros and Axor and sells trucks from the make.

European truck market by manufacturer in 2013

Daimler, Volkswagen and Volvo fighting for the world leadership

In Europe, where 7 main makes can be found, the merger between MAN and Scania was the first significant deal since the 2000 ill-fated union between Scania and Volvo Trucks (owner of Renault Trucks since 2001).

This new MAN-Scania merging makes them the number one in Europe, but not worldwidel, since Daimler and Volvo, respectively owner of  Freightliner and Mack Trucks in the US, are ahead in world rankings. These groups positioned themselves in Asia, with joint ventures in China. In 2013, Volvo bought 45% of Dongfeng Commercial Vehicles, when Daimler owns 50% of Foton since 2009.

World production of trucks of 6 tonnes and more in 2013 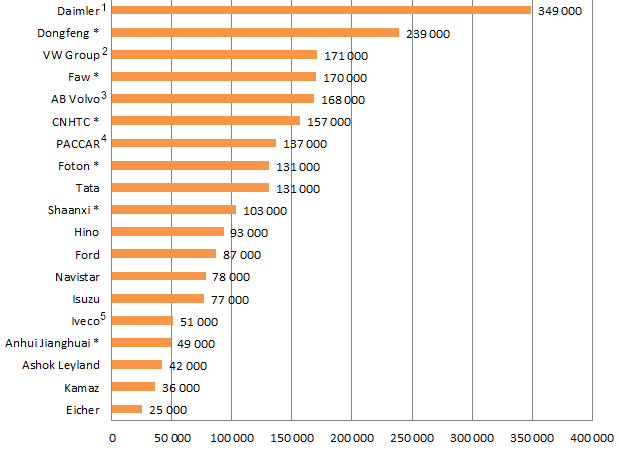 * The numbers for the Chinese makes come from sources that cannot be checked.